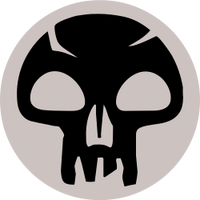 Black is one of the five colors of mana in Magic: The Gathering.

Black mana comes from swamps, where things fester and rot. Death, disease, selfishness, power at any cost - these are the twisted values of the darkness. Black magic is powerful and easy to wield, but it comes with a high price. Its spells and abilities can warp the mind, poison the land, and turn creatures into nothing. Dark minions, undead creatures, and unspeakable horrors are native to the swamp, and they're as self-serving and treacherous as the mages who commanded them. It is not completely evil, though it is often portrayed to be.

Black is a fairly simple color to understand. It focuses on winning at all costs. It can be simple, or very abstract. Though it can be an aggressive color, it focuses on manipulating the opponent at any cost. When black gets aggressive, it does so by clearing the path for its creatures. Its creatures usually don't fight other creatures because black's "fear" ability allows it to bypass all non-black, non-artifact creatures.

Black is a zero-sum color. White loves to create and encourages cooperation. It believes in continuously lifting things up to enhance the overall glory and bring unity and peace for all. Black also cares about glory but instead of creating or enhancing, it selfishly takes. And it seeks unity only within itself,Outsiders are to be killed or exploited. Any life that black gains has to come from somewhere, such as damaging creatures or players. If it draws any more cards than it naturally would, it has to pay for that in some permanent form (often its own life).

Finally, black will do absolutely whatever it has to in order to gain the upper-hand. That doesn't mean it is without limits, but it is willing to sacrifice part of itself in order to do what it does more efficiently. It can call up fearsome demons with devastating effects, but it'll have to offer up something unusual in compensation. It could kill things for cheaper, but that means it will also have to offer something of its own in sacrifice. For a color so evil in nature, it places a very high regard for the rule of equivalent exchange.

Black was especially good when the game began. Fueled by Dark Ritual and Sacrifice, it had access to temporary, but early mana the likes of which even green could not match. It could disrupt the opponent early on with cards like Hypnotic Specter, Hymn to Tourach, and other such cards to deprive the opponent of options. Kill spells would destroy anything the opponent managed to play down, and then the lock is established.

As if that wasn't bad enough, black would soon get Card Advantage in the form of Necropotence, so it could do all this and quickly replenish its hand at a heavy cost of life. Players learned that 1 life for 1 card is an extremely profitable deal, as the cards you can draw would have a much greater impact on the game than your life would. Necropotence and Yawgmoth's Bargain both broke the tournament scene, and black has continued to exercise this lesson in smaller doses since then.

As for killing creatures, it's loved to kill whatever it finds. The problem is that many times, it kills by fear, pollution, disease, and other such nasty things. How do you kill something that's undead, terrify the mindless, or pollute the already polluted? You can't, and that means it hasn't been able to kill black creatures very well. The good news is that historically, anything it killed couldn't regenerate, but the bad news is that this policy is now basically abandoned to make regeneration more relevant. Wizards of the Coast is also currently experimenting with black being unable to kill green creatures rather than black.

Black usually doesn't do well in the late game, rather, it finds innovative ways to get superior positions early on so that it can rule in the midgame. Often, this means you will sacrifice life for cards for an early advantage. Card advantage plays a very big role, though at the loss of life. It can play very well by itself through corruption effects (see Corrupt) and work with other colors all equally well. Reanimation decks have always been a favorite, finding ways to dump big, expensive creatures into the graveyard early and then play them from there for cheap. Animate Dead and Zombify both work well for this. Black is also known for it's discard effects. Cards like Wrench Mind and Pulse of the Dross are some of them. Many black spells have effects that give target creature -1/-1.