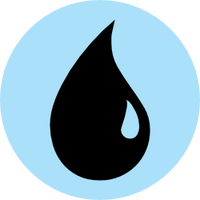 Blue is one of the five colors of mana in Magic: The Gathering.

Islands provide blue mana, the color of the deep sea and the endless sky. The strength of blue magic lies in trickery and manipulation. Blue mages work behind the scenes, scheming and stealing secrets, controlling their environments completely before making a move. Blue spells and abilities focus on "borrowing" opponents' cards and drawing the right card at the right time. With the power of blue, call wizards and weird beasts of the air and oceans to serve you.

Blue's allies are White and Black, while its enemies are Green and Red.

For the most part, blue likes to take it slow. It despises hasty actions and is also very big on deception, cloaking the truth and concealing its true motives. As the ruler of air and water, blue has always found a way to make its more aggressive creatures effective infiltrators through some form of evasion, typically flying. It also has a unique skill in the matters of time, usually reversing it by unsummoning things. Blue, as the color of intelligence, takes great pride in never running out of options. It loves to draw cards so that it always has a plan for what may come (ironically, Saviors of Kamigawa established large hands as being "wisdom," not intelligence).

Blue has long been the color of control. It has held strong to these roots since the game began, though it's become more focused on this goal over time. Typically, blue will stall the early tempo by means of counter spells, bounce, and defensive creatures. The exact means of victory depends on the individual deck, but for the most part blue is in it for the long game.

Occasionally, though, a blue deck has come along that functions like a white weenie deck, nicknamed a "fish" deck for the many merfolk that were used in early incarnations. Time Spiral in particular puts more emphasis than usual on this strategy through more aggressive, cheap creatures.