Enchantment is a card type.

They are permanents that have an effect that lasts for as long as the card is on the battlefield. Some enchantments have subtypes.

Some enchantments have the subtype Aura. That means that when they come into play, they enchant the required permanent. When you cast an Aura, you select a creature to enchant. That means that once it comes into play, you attach it to that creature (put the card on top of the creature). Auras don't have to be placed on creatures you control, as some Auras have negative effects.

Not all auras attach to creatures. Some enchant land or artifacts.

These are enchantments such as Tempered Steel. When they come into play they are placed on the battlefield, and are not attached to anything. 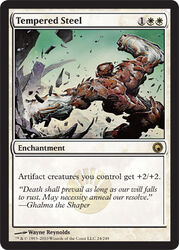 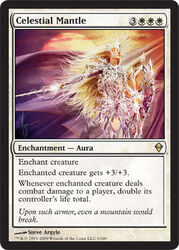