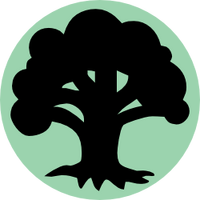 Green is one of the five colors of mana in Magic: The Gathering.

Forests provide green mana, the color of life and nature. Green spells and abilities focus on making its creatures larger in order to beat their opponent into the ground, destroying "unnatural" artifacts and enchantments, or increasing mana production. With the power of green mana you can call powerful beasts to maul your enemies to a pulp.

Green's allies are White and Red, while it's enemies are Black and Blue.

Green is a strong color, centered around brute force. It contains many large creatures with trample. Green contains many high mana cost spells, but also has many ways to accelerate its mana to cast them early. Common themes include ferocity, brute strength, instinct, and primal rage as well as harmony, tranquility and natural law. The pulse of life is the power of green mana, and as such common creature types include living trees, tiny forest creatures, and giant beasts.

Green has a long history of large-enormous creatures as well as enchantments to pump up small creatures.

The teeming forests overflow with green mana, the pulse of nature. Green magic is about growth, life, and brute force. When a green mage fights, massive creatures crash through the undergrowth, animals enlarge to gargantuan size, and wounds close before blood spills onto the ground.

Strength, ferocity, and life: These are the values that sustain the green mage.

Green mages understand that the world obeys the law of the jungle—everything is either predator or prey. Green mages do what they can to accelerate and protect nature: jungles expand, artifacts crumble, and creatures regenerate themselves. For green mages, even the plants become lethal weapons. At their best, green mages are instinctual and adaptive. At their worst, they are savage, unthinking, and predatory.

Examples of green spells include wild, lush growth, sudden predatory hunger, and the might of an entire stampede.

Green mages summon a huge variety of creatures, from forest-dwelling animals to territorial elves and awe-inspiring behemoths. Some green creatures are living wellsprings of mana; others overrun their foes in a mighty rush of ferocious power. From towering nature elementals to carnivorous wurms, green creatures are the biggest and mightiest around.

Most people playing green will play it as aggro because of its possibility of setting the game for a win very quickly, though this is not always the case. A deck based around playing Green elementals or Treefolk will likely be slow and steady, while a deck composed mainly of elves may aim for a win in the first few turns. Green is considered a strong complimentary color and is found in a high proportion of multi colored decks.