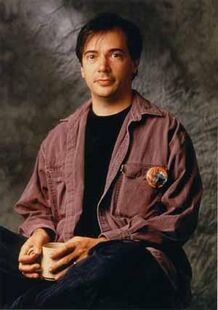 Richard Garfield had a wide range of interests, including mathematics and foreign language. All of these skills helped to inspire him to create his first game at a young age. In 1985, he received a bachelor of science degree in computer mathematics. He joined Bell Laboratories and worked there for a couple of years, but then decided to continue his education by attending the University of Pennsylvania. Garfield studied under Herbert Wilf and earned a Ph.D. in combinatorial mathematics from Penn in 1993. That very year, he created the idea of Magic: the Gathering. It became a quick success. he then went on to create 6 sets referenced as the Earlier sets. After this, he created a few other Trading Card Games, none of which became quite as popular as Magic. Later, he married and had two kids, He made a card for each event.Although, he was the creator of Magic: the Gathering, he did not create all the cards in the game today. These are the cards that he is credited for developing on his own. Today in Magic, he adds his touch to different sets and blocks.

Richard Garfield created what is known as Magic: the Gathering today as well as the original earlier sets

At certain events in his life, Richard Garfield created cards to memorialize the events

Note: None of these are legal in Tournaments. There is only one or very few of these in existence, making them extremely rare.