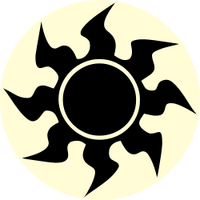 White is one of the five colors of mana in Magic: The Gathering.

White is the color of order, light, and healing. White creatures lay down the law and enforce it. Many white cards represent knights, castles and soldiers. Others represent creatures that live on the plains. Angels are powerful protectors in the sky, and clerics protect the weak and injured. It is not necessarily good, though white will often present itself in this way.

White's allies are Blue and Green, while its enemies are Red and Black.

White started as the color of protection, defense, healing, and other such passive things. Over time, although it has retained this flavor, it has adopted more of a militaristic side, using groups of smaller soldiers or the holy wrath of mighty angels. It doesn't go right for the kill as the more aggressive colors might, but it will prepare itself for the inevitable conflict. It won't let opposing armies into its territory, and should enemies declare war on white, white will take this as license to be as fierce and cruel as possible in order to protect itself.


Occasionally, when the story of a set/block puts white-aligned people at the forefront, white has been known to abuse its power, as well. The Orzhov of Ravnica block, for example, operated a virtual monopoly over the entire economy through their religious operations. The rebels of Masques block were strongly united by a common cause, and thus became more focused on combat than mercy. Even as far back as The Dark, preachers and witch hunters committed a level of persecution rivaling that of America's real Salem witch trials.

Alone, white is commonly known as an aggressive color. Packed with effective cards such as Savannah Lions, Knight of the Holy Nimbus, and Isamaru, Hound of Konda, white can quickly outnumber the opponent with too many threats to handle, and by the time he can handle it, he's already lost.


Combined with another color, white is well-suited to play the role of a supporter to whatever role the other color wishes to play. It is commonly known to be effective at controlling the game with blue. For black, they have a tendency to share in life gain. Red is more than happy to adopt the cheap, effective creatures white holds to get even more aggressive, though this makes it more crucial to get both colors of mana very quickly (say from Battlefield Forge). Green enjoys both making many little creatures and gaining life, strengths that white is eager to reinforce.